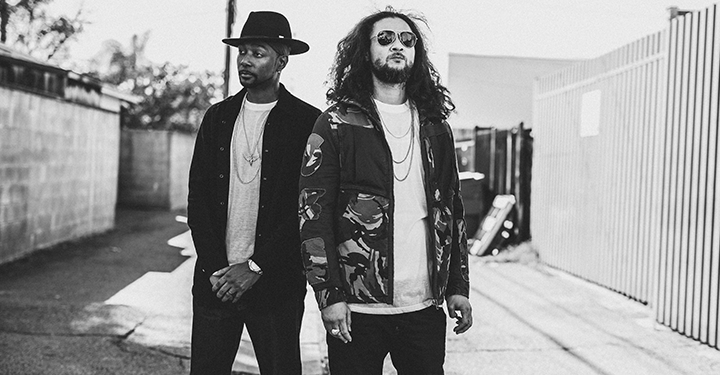 “The fans have been anticipating this album for quite sometime, for well over a decade,” beams an otherwise meticulously laidback Anthony “Krayzie Bone” Henderson, founding member of the legendary hip-hop group Bone Thugs-n-Harmony. “Bizzy and I have always been talking about doing a duets project together. It was just the perfect time.” Of course, Bizzy is Bryon Anthony “Bizzy Bone” McCane, the bombastic, perpetually irreverent member of the innovative Cleveland rhyme crew that turned the rap game upside down with their head-spinning, speed-of-light lyricism, hardboiled street rhymes, and soulful harmonies, selling close to a remarkable 30 million records worldwide.

Indeed, the Bone collective–which includes the aforementioned Krayzie Bone and Bizzy Bone, Wish Bone, Layzie Bone, and Flesh-N-Bone–has made a career out of confounding both fans and critics since making their 1994 debut with their genre-shifting, two-fisted EP Creepin on ah Come UP.

Together Krayzie and Bizzy have taken on the shortened, straight-no-chaser moniker Bone Thugs for their long-in-the-making, tag-team release New Waves backed by the acclaimed Entertainment One Music label. The star-packed, 14-track project is fueled by the two most charismatic members of the still-going-strong Bone Thugs-n-Harmony. The inspired duo insist that New Waves is yet another chapter in the rich history of the five-man troop.

“We love the process of making music so this wasn’t a hard album for us to make,” explains an a-matter-of-fact Bizzy of the recording process behind New Waves. “We have so much history with not only eOne Music, but with eOne Music president Alan Grunblatt. He’s the same dude we’ve had all our success with since E. 1999 Eternal. Everything we’ve ever done has been successful with Alan. So we’re comfortable with knowing that our project is in good hands.”

Backs Krayzie: “This album is a breath of fresh air coming from Bone. We wanted to give this project a different look. That’s where the album title comes from: New Waves. We will always be a group…we will always be Bone Thugs-n-Harmony, but this is different than from the norm. This is Bone Thugs.”

Just as the Wu-Tang Clan’s Raekwon and Ghostface Killah created undeniable hip-hop magic by teaming up, Krayzie and Bizzy view New Waves as a can’t-miss opportunity to showcase yet another facet of the Bone mystique. And it is all sparked by the effortless chemistry between the two rhyme stalwarts. “Bizzy is one of the coldest lyricists of all time,” Krayzie glows of his otherworldly partner. He’s special. And Bizzy has mastered his style…his craft. Once any artist does that there’s no limit.”

Bizzy Bone showers equal praise on the indestructible rapper/producer who has often been described as the leader of Bone Thugs-n-Harmony. “I always knew from the first day I met him that Krayzie had the touch of Dr. Dre and EPMD in him,” he says. “He’s everything you would epitomize a legend to be. He was the visionary behind Bone Thugs-n-Harmony technically. He was the first to understand how to get instrumentals done with just a boom box. It’s ‘hood, but Krayzie is a musical genius.”

“I think it’s time I take a flight to elevate my mind and look at my life, and try to get right/The big lights blinding me, they bright/I’ve been in darkness most my life,” testifies Krayzie. Meanwhile Bizzy reflects on the meteoric rise of his Bone brothers: “From the ‘1st of tha Month’ to the ‘Ruggish Bone’/Every week that ‘Crossroads’ stayed on the Billboard/Baby said Wayne made up the word bling/ Man, I should have patented my whole damn flow…Kray and I never had a place we could go/Walking around wondering if we are ever going to blow?”

“It’s about being in this business for so long and seeing the good, the bad, and the mostly ugly,” explains Krayzie of the message behind “Coming Home.” “You want that sense of being normal again. You start to miss home a lot more. And Cleveland will always be home for us.”

For Bizzy, New Waves is a testimony to Bone Thugs’ boundless eclectic vision as artists. “We took this project very seriously,” he proudly states. “The people we have been in the studio with have been successful artists as well. We wanted to show the fans that we are always evolving; always breaking new ground.”

And on the powerful “Waves,” Krayzie and Bizzy are joined by their Bone Thugs-N-Harmony brethren on a dynamic track orchestrated by super producer Scott Storch. According to Bizzy, he was completely floored by the experience of working with the multi-platinum beat master, who has crafted chart-topping classics for the likes of Beyoncé, 50 Cent, Dr. Dre, and Christina Aguilera. “It was an honor to work with the man,” he says of Storch. “He’s a really talented guy. His sound was the element that Bone Thugs needed.”

As for breaking bread with their Bone Thugs-n-Harmony family, Krayzie says there’s a reason why the group remains a top-touring draw nearly 25 years into their indelible run. “There’s always magic when all five of us are in the studio together and onstage,” Krayzie says. “I don’t care if we are just coming up with a hook. It’s going to be the dopest hook you ever heard. That’s the greatness of Bone Thugs-n-Harmony.”

For Bone Thugs it’s a towering legacy worth protecting. When you have been discovered and mentored by late N.W.A. founder and larger-than-life gangsta rap giant Eazy E; are one of the few musical acts to record with both the Notorious B.I.G. and Tupac Shakur; and have released a string of platinum and multi-platinum albums, including the crossover landmarks E. 1999 Eternal (1995), The Art of War (1997), BTNHResurrection (2000) and Strength & Loyalty (2007), your resume speaks for itself.

“We’ve endured,” Krayzie adds. “The fans look at Bone as being authentic. The ‘90s era we came out of is sacred. Our generation made hip-hop stick. On New Waves we are letting everyone know we ain’t going anywhere.”